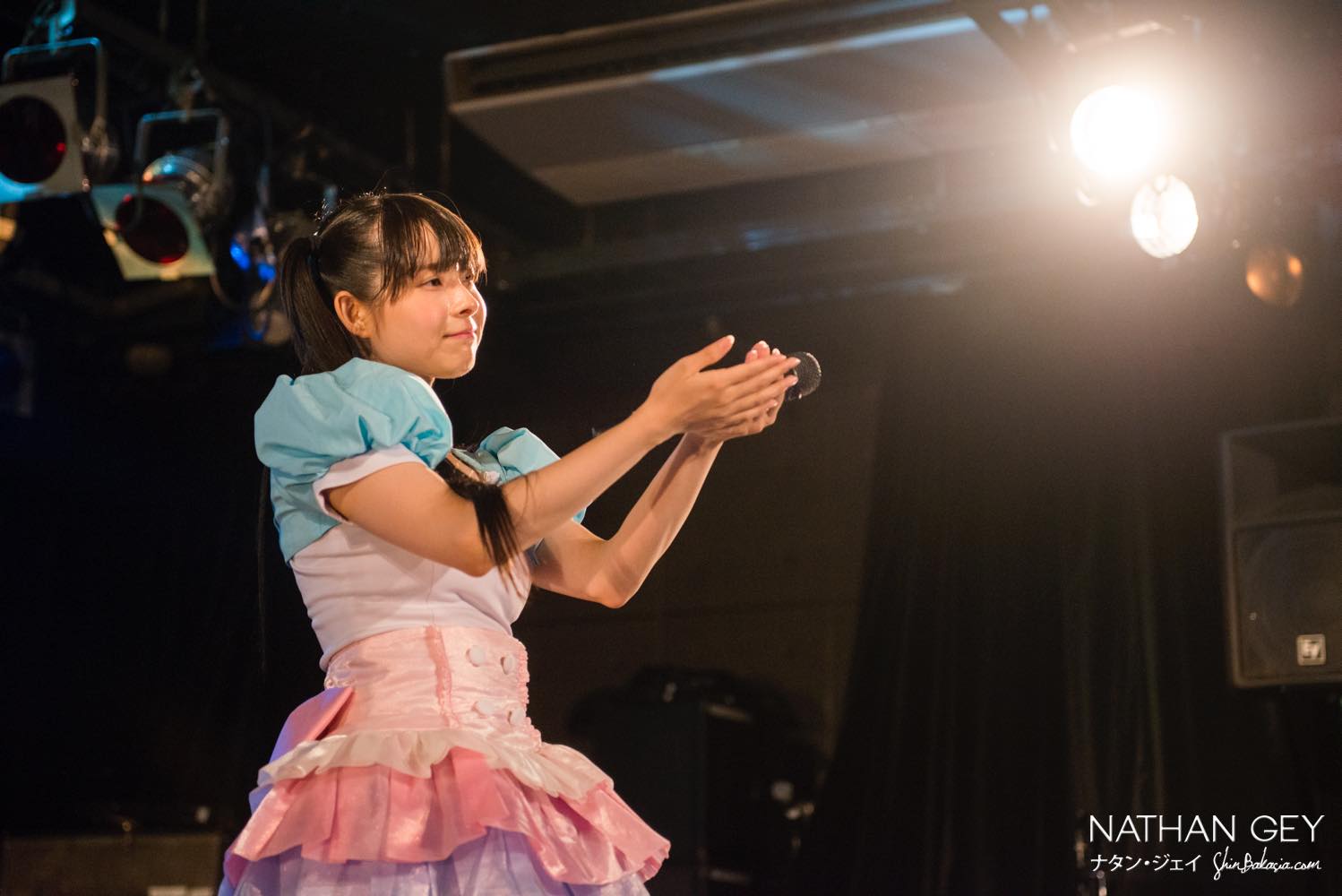 June 7th marked the last performance for Iketeru Hearts’ light blue member Yurano Yuno, after announcing her graduation a little less than a month beforehand. While the medical reasons for her departure left a bittersweet taste, the group and their fans did their very best to throw a memorable performance, turning the night into a happy celebration.

Iketeru Hearts showed up on stage wearing their pastel-color major debut outfits, and opened the show with nostalgia, as they started with four songs from their Stand-Up! Records trainees days. From sister group Afilia Saga’s “NEXT STAGE” and “Sorairo Days”, they then performed the cool “Tenbu no mai, akatsuki no mon”. This set ended on the iconic “Triangle Wave”, for which Afilia Saga member Momoko Little Berry showed up as a guest performer. Momoko Little Berry started as a Stand-Up! Hearts trainee at the same time as the entire Iketeru Hearts line-up, but was promoted to Afilia Saga a few months before their major debut.

Without surprise, the introduction MC was punctuated by youngest member Nijika’s tears, causing a general laughter among the group and audience, as Nijika has a reputation for crying easily. Leader Arata Yuyu asked the audience to give it all and be the most energetic they could for Yuno, who greeted everyone with her signature “Ohamepo!”. “[Yuno] even signed her posters as “the 23 years-old twintails Yuno”,” Ochi Karin jokingly added.

The show went on with debut single “Let’s stand up!”, the energetic and silly “Shrimp Girl”,
and single B-side “Otomegokoro”. The group then disappeared backstage to leave Yurano Yuno by herself on stage, where she delivered a solo performance of “Soukoku no Spica”, reminding everyone in the venue of her sleek singing talents.
Her comrades joined again for “Believe in my dreams”, for which Yuno started with a solo part, and the group kept on giving all their energy for “Shishin kakutei”, “ORIGAMI” and “GIRL, Me♥”. The night peaked with the performance of two of their latest singles, “Lumica Jane”, and the dark and catchy “Zaishou no Lucifer”.

The following MC left some time for the members to talk more in details about Yuno’s graduation goods she designed herself. “I was worried not many people would come today, since it was kind of a short notice, and I will do my best until the very end,” Yurano said, “Yesterday was my last regular performance, and seeing the fans tearing up made me tear up as well… it’s also okay to cry today if you want to, let’s cry together! (laughs)”.
The members then started to joke to lighten up the mood, to which Yuno added a little anecdote. “Even [Uchida] Kotone-chan kissed me earlier today and said “I love you” in a very deep voice, that was a bit scary,” Yuno told everyone while laughing at the thought.

The members had a surprise ready, and a white screen was rolled down to show a short VTR featuring video messages from all Iketeru Hearts members, as well as female pro-wrestling star Nagayo Chigusa. Yuno was left in tears, as her friends brought a hand-made gift for her on stage: a wooden board, decorated with photos of the group with Yuno, and handwritten messages from each one of them. Manami Kazune took advantage of the situation to joke once more. “Look, Nijika didn’t say anything interesting on the video, but she wrote the longest message!” she said, making Nijika laugh and tear up at the same time.

The night had to come to an end, with tear-jerking ballad “I will”, on which all the members started sobbing when Yuno’s solo line started. But it could not be over in such a gloomy atmosphere, and the group closed the main show on the upbeat “Happy End”.

The fans didn’t want to leave right away, and immediately started yelling Yuno’s name in a loud “Yurano! Yuno!” unison call. The group showed up once again, wearing the signature light blue Yuno tee-shirts, to perform the very lively “Sekai he habatake!”, flapping their hands along with the fans, before giving a final speech.
“The idea of graduating still hasn’t sunk in…” Yuno said, “maybe tomorrow, when I hear your voices in Take your Hearts (Iketeru Hearts’ weekly radio show on Shibuya Cross FM), I will realize that I am not a member anymore… Thank you for giving me the best graduation live.”
Leader Arata Yuyu closed the final speech greeting the fans. “We’re becoming a seven-members unit, but in our hearts, we will always be eight of us. Thank you for everything,” Yuyu said.
The group left the stage hugging Yuno and crying at the same time, showing once again the strong bonds tying the members together.
Yurano Yuno expressed her desire to pursue a career in the pro-wrestling industry before, and we wish her a prompt recovering and all the best luck in her new life!

Iketeru Hearts was originally the trainees unit of agency Stand Up! Records under the name « Stand Up! Hearts », and started their activities in September 2014. They officially debuted as a full-time idol group in September 2015, changing the group’s name to « Iketeru Hearts » a few months later, making it the official little sister group of the famous Afilia Saga. Iketeru Hearts had their major debut in February 2016 with first single « Let’s Stand Up! », produced by Hello!Project leader Tsunku. The group counts now seven members supervised by leader Arata Yuuyu.

Special thanks to Stand-Up! Records staff and Yamamoto-san for inviting us to the filming and letting us take pictures of Iketeru Hearts.